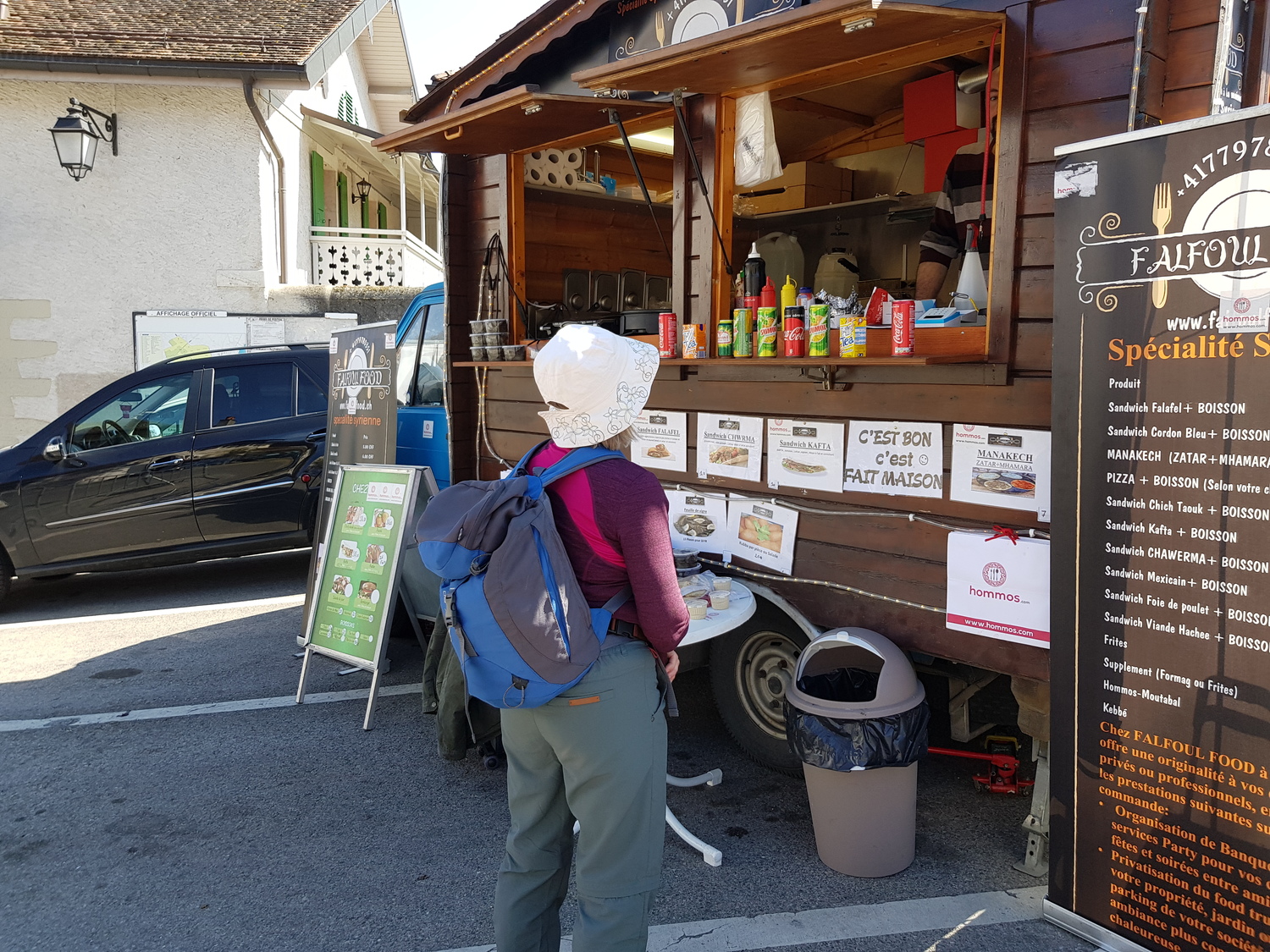 This was one of Sue's favourite days. It did not start too well, however. Leaving the train station in Gland, we had difficulty finding the Way. The signposting in the Canton of Vaud leaves a lot to be desired!! Turning out of the station on the industrial side we continued along the railway until we met a main road. Knowing where the lake was, we continued in this direction. Rightly or wrongly it however gave us a very interesting path through a delightful wood and alongside old tank defences including a secret house of defence that was only bought to light in the ‘70s. Meeting the main road, again the signing was confusing. We continued to follow the road for a short while until we picked up a more suitable path. This led us to the Musee National in Prangins. Here we stopped for coffee and visit the adjoining church. There was a lovely benediction for pilgrims on the wall under which it asked that the stamp on be used on the wall! I never cease to be amazed at the strange behaviour of people who pass this way. From here we continued through very pleasant villages alternating with little woods, giving our feet a rest from the hard roads. Following the railway line to enter into Nyon, we saw beautiful shows of daffodils. Having visited Nyon in the past and it being Saturday, we did not stay long but this little town is certainly worth a visit especially the port area. More beautiful woods took us up a little to a plateau with a lovely view of the Jura. We had, however, began to see more and more signs saying ‘Prive’ and bigger and bigger houses. Arriving in Crans -près-Céligny we visited the church which was amazing. It was beautifully painted. It had an altar (which is rare in this part of the world) and the ceiling was painting with ‘patchwork’ paintings of Bible images. The church overlooked the lake and a perfect site to picnic. Moving on to Céligny, we came across a food truck run by a Palestinian refugee born in Syria. His food was very good and his story sad. The church in this village were having a meeting in their hall and didn’t want to be disturbed. This must happen quite often as the stamp was in a little niche outside in the wall. Our path took us in the direction of yet another wood but a sign saying ‘Vieux cimetière’ (Old Cemetery) caught our eye. There we found a grave with ‘Richard Burton’ engraved but thought it must be ‘someone’ else with the same name - but no, it really is THE Richard Burton and opposite him lies Alistair Maclean! Sue had previously said that it would be nice to bump into someone famous…! More woods, more beautiful views, flowering trees and pleasant temperatures leading to the Ecumenical Centre in Bogis-Bossey, a beautiful chateau. Walking down a lovely tree lined path we arrived in an area of modern orchards. By now it was becoming quite hot and we finished our walk to Coppet on pathments. A last look at the church in Coppet before decending towards the station to return to Bern after a very pleasant walk.